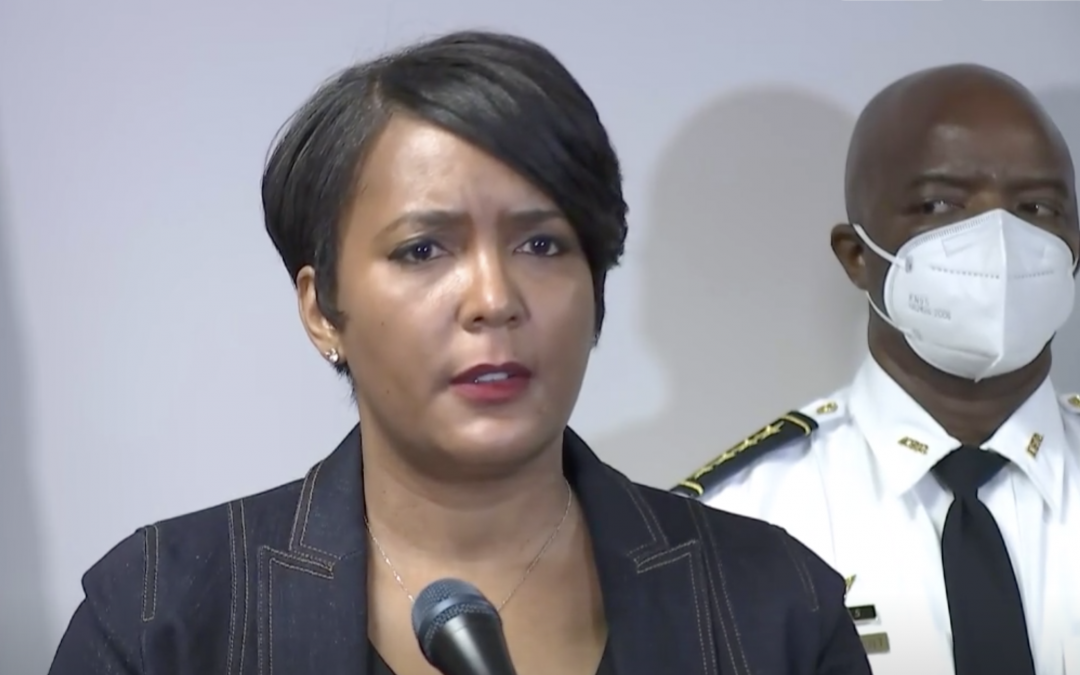 According to The Daily Caller:

An 8-year-old girl was shot July 4 in Atlanta during a night marked by violence, CBS 46 reported. The girl was shot in the area near where Rayshard Brooks was killed, and Atlanta Mayor Keisha Lance Bottoms told protesters Sunday that it’s time to clear out.

The child was riding in the car with her mother and her mother’s adult friend just before 10 p.m. when the incident occurred, police said according to the CBS 46 report. The driver tried to enter a parking lot near the intersection of University Avenue and Pryor Road when the car was blocked by a group of armed individuals, one of whom began shooting into the vehicle.

Atlanta Mayor Keisha Bottoms said during a press conference on the shooting that it’s time for people to “clear out of that area” where Rayshard Brooks was shot.

“This discussion, this mediation, and … it’s over. At a point where an 8-year-old baby is killed, the discussions have ended.”

Try as she might, that’s too little too late to wash away the mayor’s culpability in this child’s death.

Not even a month ago, Mayor Bottoms implied the police were wrong in the shooting of Rayshard Brooks.

The New York Post quotes the mayor as saying:

“Based on what we saw happen Friday it became abundantly clear very quickly that there is a need for us to take an immediate look at our training policies,” the mayor said. “Some of these policies, in m opinion, while we are speaking these policies, they are not necessarily integrated into our training.”

“I’m also requiring de-escalation, generally and specifically prior to the use of deadly force in accordance with the principle that officers should use de-escalation techniques to gain voluntary compliance and avoided or minimize the use of physical force,” she said.

Here is a black mayor, in a city of more than 5 MILLION people (34% of whom are Black), who could have very easily said that justice requires a process and that process requires evidence and the evidence shows TEN FELONIES committed by Mr. Brooks during his violent conflict with Atlanta PD.

Not ten felonies on his lengthy rap sheet. Ten felonies he would have been charged with from his SINGLE, violent interaction with police.

This mayor could have pointed out that the entire confrontation between APD and Mr. Brooks was nearly an hour long.

She could have pointed that Mr. Brooks was was incredibly intoxicated and driving. Something that kills about 29 people EVERY DAY in America.

She could have given credit to the officers for taking as much time as they did to sympathize with Mr. Brooks as he told them his mother had passed, as they congratulated him on his daughter’s birthday and how they politely asked him to take a breathalyzer after finding him passed out drunk in the drive through.

She could have pointed out that after 18 minutes of patient conversation with Mr. Brooks, the officers asked him if he knew where he was. Mr. Brooks continually claimed to be in locations he was not. Suggesting multiple different locations in different counties across the state. He was not in any of those places.

But she did not.

Instead, for the sake of political capital, the mayor chose to side with the mob and act as if police are the problem.

Now, that mob has killed a child.

And the mayor who sided with them then, does not get to suddenly act outraged by their behavior.

Atlanta has been burning for MONTHS.

This incompetent mayor has failed to stop it. Supposing she even wants to.

The moment the mayor suggested the police were wrong and reform was necessary, she gave credence to the cause of the violent rioters in the streets.

People who are ACTUALLY KILLING INNOCENT PEOPLE WITHOUT PROVOCATION.

Atlanta. Where the police chief resigned and officers began calling out of work in protest against the city’s anti-police stance.

Now, her implied endorsement of their behavior has led to the death of an 8 year old girl named Secoriea Turner.

And what does the mayor do? She blames Open Carry laws in Georgia.

“The sad part is they can walk down the street with weapons because Georgia law says it’s okay.”

These are the ramblings of a lunatic.

An 8 year old is dead. And the sad part is open carry laws that have existed for hundreds of years?

Standing on the grave of a child to push her anti-Second Amendment agenda and put the blame on the shoulders of law-abiding Americans rather than the lawless and reckless thugs whose agenda she endorses through her anti-police position following the justifiable shooting of Rayshard Brooks.

There are good people in Atlanta. Those people have a moral obligation to do everything in their power to ensure Mayor Lance Bottoms doesn’t see another day in office.

Begin NOW working to recall her.

Begin NOW campaigning against her in the court of public opinion.

Begin NOW so that no more innocent lives are lost while Mayor Keish Lance Bottoms continues to cozy up to radical, violent thugs in the streets of Atlanta.